Why Celebrating Pride is Important…and Still Not Enough I was born in Pittsburg, Kansas, a small town where you went to church, played tee-ball, and asked a girl to prom. I had a loving family and good friends, but I still felt different. For me, growing up gay in the 1970’s wasn’t just about living an expected life, but finding people I could relate to as I learned more about myself.

So when I attended Pride for the first time, almost 25 years later, I was overwhelmed. I had never experienced anything like the acceptance I felt that day. Since then, and after more than two decades of celebrating, I’ve connected with people who love me for who I am, including my husband. And as a media executive, I’ve seen how Pride gives every organization the chance to join in the celebration and take a stand.

I’ve also seen how plenty of companies show up for the party, but fail to show up when it gets difficult; who create rainbow logos, but don’t create adequate space for our stories and experiences.

This year, let’s do both! Let’s go all out for Pride—and then, commit to making our LGBTQ+ community proud: by celebrating us, elevating our stories, and advocating for positive, lasting change.

CELEBRATE: Showing up, cheering on

To an outsider, it might be easy to focus on the hardships faced by the LGBTQ+ community. So many of us have faced the fear of being unloved for who we are, or being discriminated against—not to mention fear of the violence that disproportionately affects trans and non-binary women of color. Pride itself is a commemoration of the Stonewall Riots of 1969, and the movement started there.

But in our community, joy is a form of resistance, and there’s a reason everyone is invited to the party: massive, accepting crowds filled with allies and LGBTQ+ folks alike are proof that being queer doesn’t mean being alone.

I’ve been so proud to work with our partners to find different ways to celebrate. Last year, in partnership with The Real Real, Andy Cohen surprised an LGBTQ+ couple with Bravo’s first virtual wedding. And we’re working with more brands this year, including White Claw and Discord.

ELEVATE: Sharing Stories, On Screen and At Work

Growing up I didn’t know what I could be. I never saw gay people on TV. I couldn’t imagine a world where I would be married or have a family. And I didn’t see out and successful leaders in my community.

I can’t help but wonder how my life would have been different had I been able to see role models like Will Truman and Jack McFarland, or watch Rachel Maddow, or connect with people like Will and Tess on This Is Us—real, relatable characters, and not just caricatures.

That’s why elevating our stories is so important. At NBCUniversal, we reach hundreds of millions of people around the country and the world—and we have the responsibility to reflect the world as it is, and how it could be.

We’re proud of our history of sharing these stories—and know we have to tell even more to inspire conversations, challenge perspectives, and change lives. Together, we’re elevating an image of family that my young self—and so many others—would be delighted to see.

And our responsibility doesn’t end on screen. It also extends to our offices (which, I know have also recently been on screens).

When I first arrived at NBCUniversal, I remember feeling alone, not knowing if I had a community. And that’s why it has been so important for me to be a visible role model for others. At our company, we have a group called OUT@NBCU, where I’ve been able to connect with LGBTQ+ colleagues, mentor the next generation, and be a resource for people.

A group like this would have made me feel far less lonely I was starting out in media almost 20 years ago. And as a manager, I’ve found that a safe and open work environment isn’t just good for our people—it’s good for our business and our partners. When people don’t have to worry about whether they’ll be accepted, they have more time, energy, and creativity to do their best work.

There’s plenty of criticism—much of it valid—of companies who show up for Pride, but fail to show up for their LGBTQ+ employees and communities all year long. So if you’re going to march with us in June, you need to be willing to walk the walk all year long.

I’ve been fortunate to see what that looks like across Comcast NBCUniversal. In fact, one of the reasons I joined was because Comcast provided insurance benefits to same-sex couples. But before 2015, the federal government didn’t recognize same-sex couples, and considered Comcast keeping my then-fiancée insured as income—so they taxed me on it.

This was a burden no straight couple faced—and it was a lot of money. But here’s what happened. Our CEO, Steve Burke, sent me (and other employees at Comcast) a letter saying we would receive a check to offset those taxes. Now, we didn’t just have insurance; we also wouldn’t have to pay more for it than any other couple.

Policies like these are how you get from equality to equity in the workplace. And they send all of us workers a message: our company stands behind us.

If you’re in a position of leadership, I hope you’re asking how you can do the same. As our country increasingly supports parental leave, does your company provide the same benefits to LGBTQ+ parents? Do they empower trans and non-binary employees—whether that’s allowing leave for transitioning colleagues, or encouraging them to use the restrooms they find comfortable? Do they invest in support networks for LGBTQ+ employees, and sponsor their growth? Because until you do—until you put in the basic work—your celebration isn’t authentic or meaningful.

What starts as a celebration this month is just that—a beginning. Showing up, elevating, and advocating for the LGBTQ+ community is a year-round responsibility. And it’s something we can do for every community and audience. Whether we’re lifting Black stories, standing against Asian hate and the rise in antisemitism against Jewish Americans, fighting for gender equality, or yes, reaffirming that love is love, our industry has the power to shape conversations, offer people much needed connection, and make the world a better place. I couldn’t be prouder to be a part of this change. 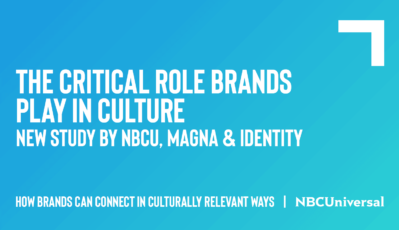