Comcast, NBCUniversal and Sky sit at the intersection of media and technology. Now, the company is evolving its relationship with marketers around the world, collaborating at the earliest stages of the investment process and expanding its role as a strategic partner throughout the purchase cycle. With Co-Lab, global brands and agencies can leverage the cultural trends gleaned from the almost 700M individuals a month who engage with One Platform, paired with the creative insights, resources and strategy to transform that knowledge into action. Co-Lab taps into leading minds from across both NBCUniversal and Sky, from Creative Partnerships to Measurement & Impact to Global Partnerships, to develop comprehensive plans that brands can execute across One Platform and beyond.

“From ONE21 to the Upfront, we are opening up more doors to our partners, deepening our relationships with them, and providing unprecedented access to the incredible insights and talent who comprise the NBCUniversal and Sky family. With Co-Lab, we’re creating another entry point for marketers to access NBCUniversal and Sky’s vast platform of capabilities, with an eye towards developing bespoke strategies for global brands seeking local resonance with audiences around the world.”
-KC Sullivan, President and Managing Director, Global Advertising & Partnerships, NBCUniversal

Sky is Europe’s leading media and entertainment company and is proud to be part of the Comcast group. Across six countries, we connect our 23.4 million customers to the best entertainment, sports, news and arts including our own award-winning original content.

Our technology, including the market leading Sky Q, connects people to everything they love – with entertainment from Sky TV, Netflix, Disney+, Amazon Prime Video and BBC iPlayer, and apps like Spotify, YouTube, BBC Sounds, Highbrow, Fiit, and more, in one place, easy. Our streaming service NOW, brings viewers all the enjoyment of Sky with the flexibility of a contract-free service.

Building on the success of Sky Originals like Chernobyl, Gangs of London and Brassic, we are doubling our investment in original content by 2024 through Sky Studios. Sky News provides impartial and trustworthy journalism for free, Sky Arts is the UK’s only dedicated free-to-air arts channel making the arts accessible for everyone and Sky Sports, our leading sports broadcasting service brings customers some of the biggest and best global sporting events from the Premier League to Formula 1 and everything in-between. Our new TV and movie studio, Sky Studios Elstree, which will open in 2022, is expected to create over 2,000 new jobs and generate an additional £3 billion of production investment in the UK over the first five years.

We believe that we can be a force for good in the communities in which we operate. We’re committed to being Europe’s first net zero carbon entertainment company by 2030 and we’re proud to be a Principal Partner and Media Partner of COP26. We take pride in our approach to diversity and inclusion: we’ve been recognised by The Times and Stonewall for our commitment to diversity and we’ve set ambitious 2025 targets to continue to increase diversity and representation. We’re also committed to investing £30million across our markets over three years to improve our approach to diversity and inclusion, and to tackle racial injustice.
# # # 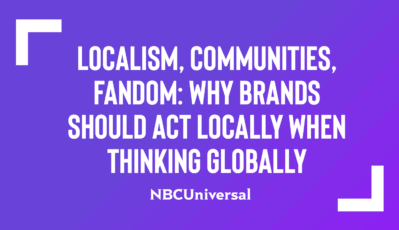 Save This
NBCUniversal + Sky
Global Partnerships